Every Chief Executive and Chief Communications Officer is now regularly faced with the challenge of if/when/how to engage on a broad range of social issues that impact one or more of their stakeholders. The typical calculus: If we speak out, do we positively reinforce our values or do we create a bigger problem for ourselves? How do we thread a needle when our stakeholders, like the world itself, is so divided on so many issues?

Each of the speakers in this session described their enterprise’s approach to deciding whether or not to engage on a social issue.

Argenti offered a quadrant that plots the risk of an action versus its alignment with stated values: 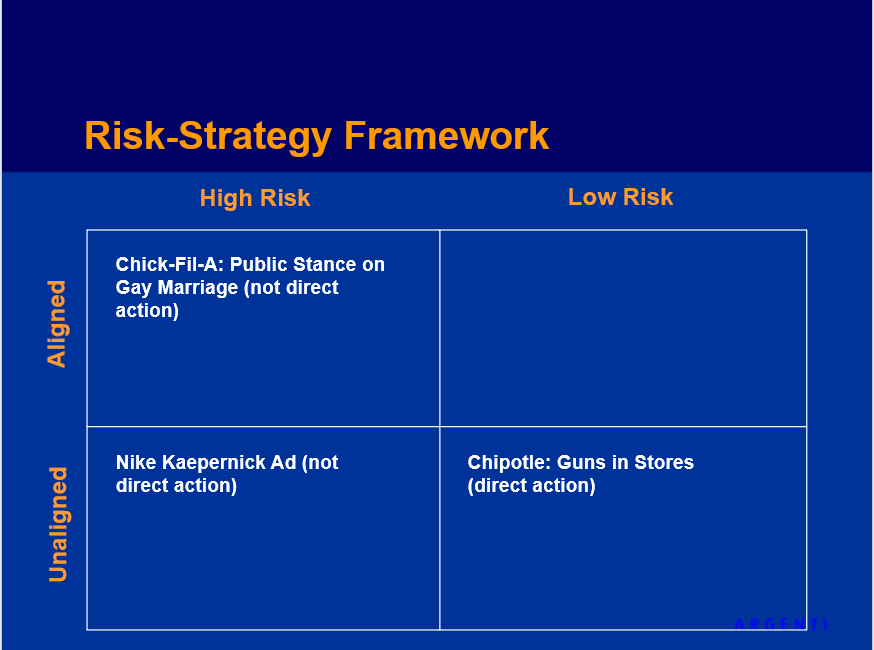 Hymes shared with the audience how Starbucks has always been guided by its mission statement, “To inspire and nurture the human spirit – one person, one cup and one neighborhood at a time.” In the wake of social activism in Ferguson, MO, the company took on the topic of race relations in a public, though unsuccessful, campaign (#RaceTogether).

Finding itself on the defensive after two black men were asked to leave a Philadelphia, PA store, Starbucks focused internally in order to affect change at scale.

What did Starbucks do:

Eighteen months ago, Allman and her team made a recommendation to the Exxon Board to take a proactive and public stand on a social issue.

“They didn’t come back with ‘no’,” Allman said. “They came back with ’why?’ We didn’t have any backup other than ‘we think it’s the right thing to do’.”

This response kicked off a process of research and analysis to look at “what worked, what didn’t work, and what were the safe spaces.” 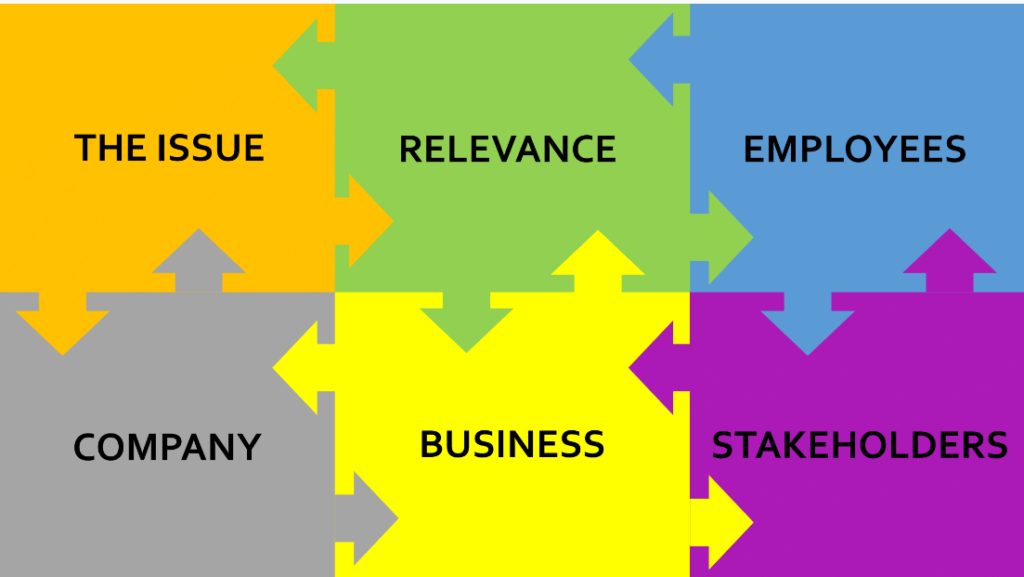 But getting to 100% agreement on any topic was still elusive. Fellow Page member and panelist Linda Rutherford advised Allman not to seek total buy-in, but rather to aggregate multiple perspectives across the enterprise and find out what topics garnered strong support.

Levels of interest would be signified through traffic light colors of green (80% or more support), yellow, and red. 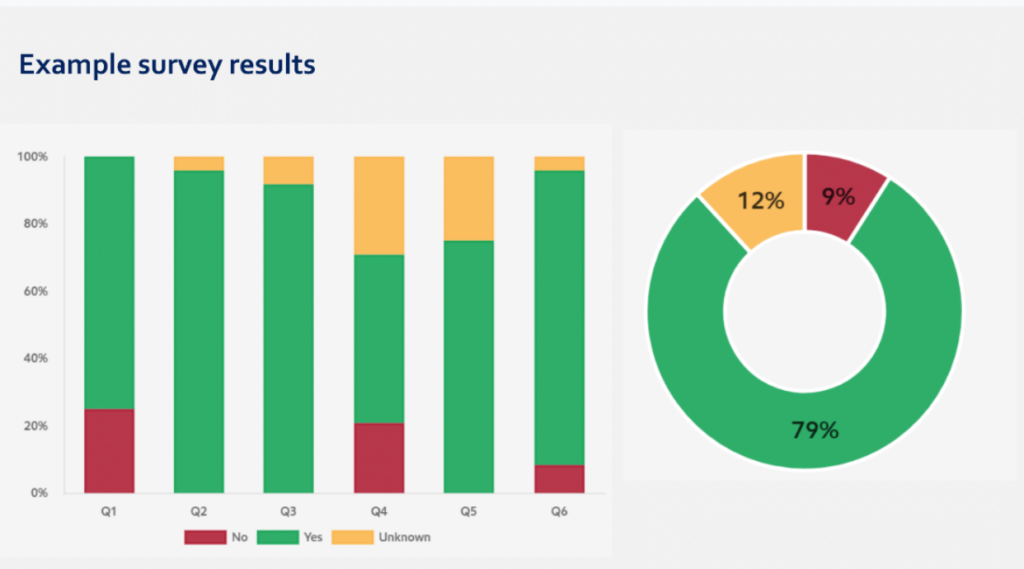 Exxon built an app to get real-time responses from stakeholders on whether to engage on different issues. Helps inform decision and gauge risk.

Rutherford explained how Southwest Airlines instituted a new process for weighing and enacting responses to social issues following criticism for not taking a public stand on gay marriage rights.

“It was an opportunity for us to understand and that we needed to think things through more holistically.”

She created a social topics committee, including 10 people from various functions across the business, with the goal of generating real-time responses to emerging issues.

From there, Southwest continued to iterate its approach.

“It still felt like the decision about when to engage was based on the loudest voice in the room,” Rutherford says.

Just as Rutherford had advised Allman at ExxonMobil to do, Southwest created a framework to gather collective input from a range of sources, to see what issues were gaining support. 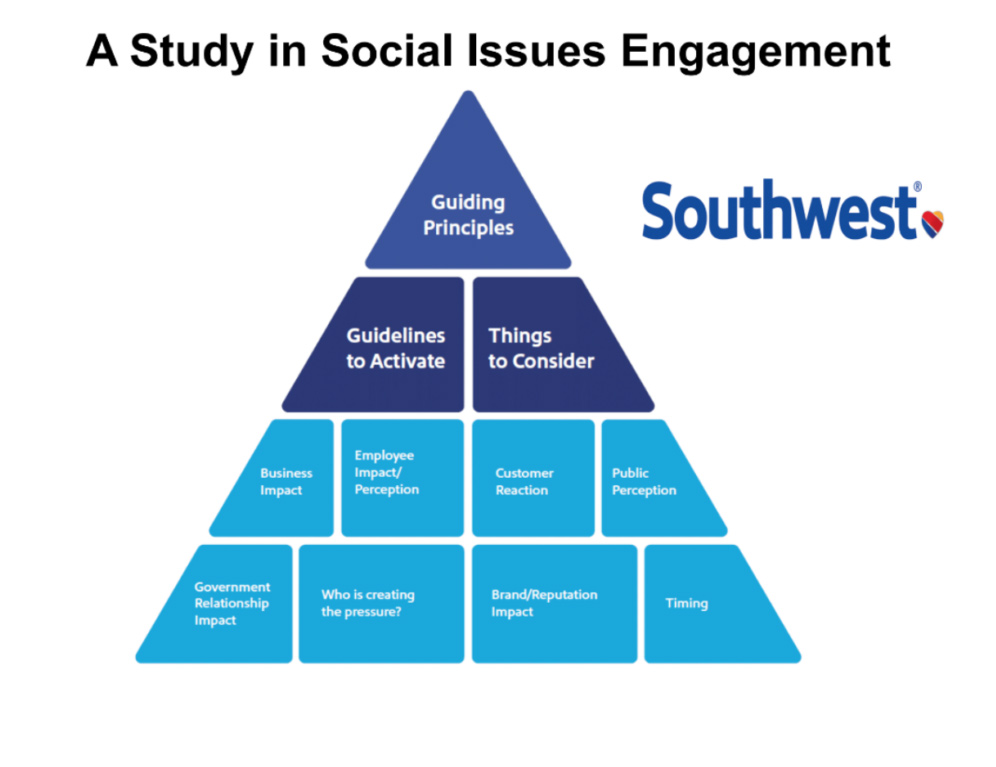 In their own words:

“Whatever your station in life, or how you look, that will not determine whether we will welcome you into our space.”

“ExxonMobil is an engineering-based company. Whatever we decide to do has to be measurable, and consistent.“

“We still have a lot of “fussin’, cussin’ and discussin’” sessions. In the end, the CEO feels better because he’s getting collective input from different voices, all with skin in the game.”