While we used to believe that building the pipeline would resolve the problem, experience and research demonstrates that is not the case. Women are overwhelmingly underrepresented at every level of leadership, and they face obstacles on the path – all despite the fact that gender diversity clearly leads to better financial performance. In this ‘fireside’ keynote, corporate governance leader and former Fortune 100 CEO Ellen Kullman described the work of Paradigm for Parity to help companies accelerate the pace of achieving gender parity.

The mission of The Paradigm for Parity:

The Paradigm for Parity coalition has committed to achieve gender parity in leadership levels by 2030. Companies have a fiduciary responsibility to grow long-term shareholder value. Gender diversity in leadership plays an important related role.

Kullman explained the origins of Paradigm for Parity, which came together 2015 when a group of powerful women convened, realizing that newly professional daughters were facing “the same kind of issues that we had faced in the 80s, and we quite frankly got pissed off.”

Kullman raised findings from another study by Lean In & McKinsey that demonstrates how women do not progress through the leadership pipeline, least of all women of color. 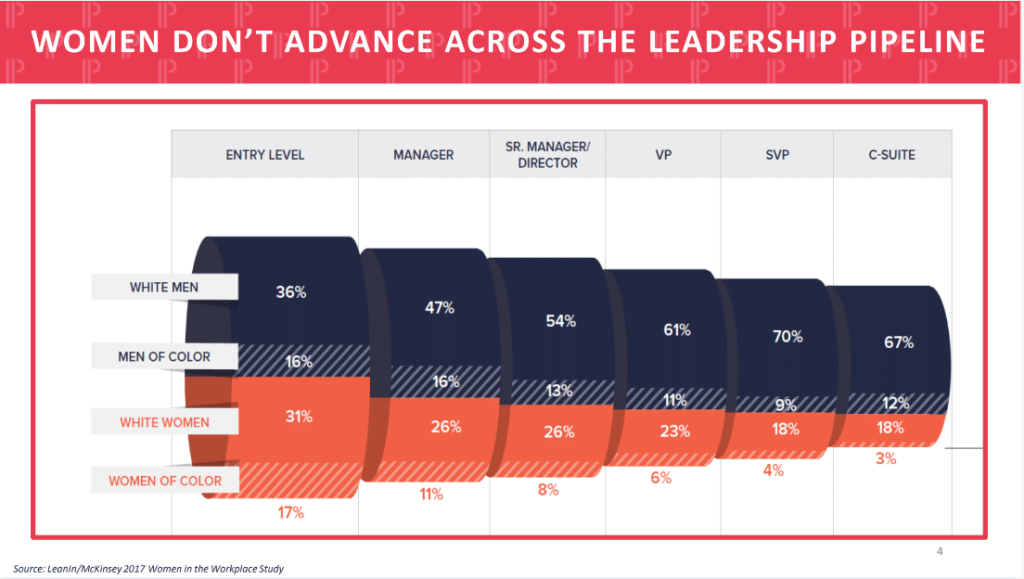 One reason is women tend to fall off of line jobs into support roles, while the majority of CEOs come from the line.

“We are in the workforce in equal numbers to men, but by the time we get to the C-suite, only one in five is a woman. We get traded off along the way.”

Paradigm for Parity has signed on 82 companies committed to improving the pipeline of women in leadership roles within their organizations. The Paradigm toolkit includes five action items:

In her own words:

“United Technologies from 2012 to 2018 went from 18% women in leadership to 28%. They use affinity groups very strongly, and feel they have a voice in terms of making the company a better place for them.“

“Interesting thing is I didn’t view myself as a role model, and I had to embrace that to create opportunities for women to come up in the organization. We all have more power in these situations than we know and if we’re not going to do something to help then people will think we don’t care.”

“The external world views a female CEO as a woman first, so use it to your advantage where you can. I was chief recruiting officer and we got a lot of women and people of color who applied because of me.”